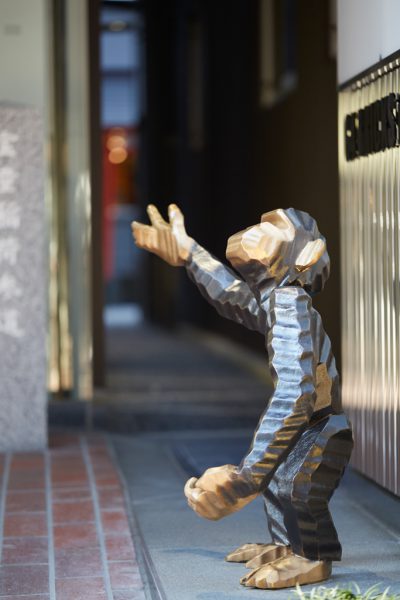 The approach from Renga-dori through Hodo Inari Shrine is decorated by Sculptor Motoka Watanabe to be an art project. Hodo Inari Shrine is a guardian god of Ginza 4-chome district.
This shrine is worshipped as the god of childcare.
In Edo period, the town headman Yazaemon made an offer to move an enshrined deity from the garden hilltop named Momijiyama in Edo Castle to Ginza 4-chome so this place was called Yazaemon-cho until 1930.
This approach to the shrine was completed in 2016, was the year of monkey in oriental zodiac.
Therefore the three lovely monkeys were created. A monkey have been believed as a sacred messenger, a talisman, and a guardian so they worship at shrine and stable since ancient times.
Also a monkey in Japanese Kanji “猿-Saru-” have another way of reading “En” by the meaning of matchmaking as in Kanji “縁-En-.”
For all of these reasons, the art name of this approach is “猿結参道-En Musubu Sando-“ and in English “Happy Monkey Avenue.”
The three charming monkeys are not only for to guide everyone to the shrine, but also hoping to become the guardian symbols of childcare and matchmaking.

≪ ART WORKS
back to INDEX