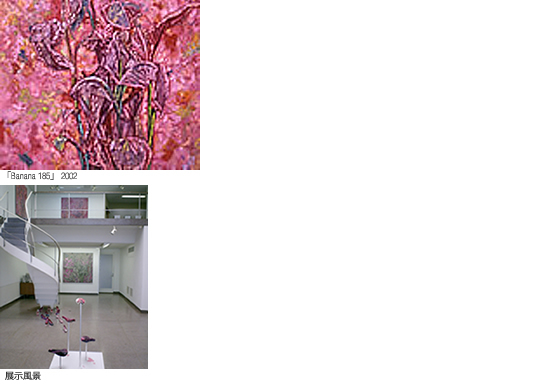 Cai Jin, a Chinese contemporary female artist, showed her oil paintings, sculptures and drawings including 9 new oil paintings in this exhibition. Cai Jin was born in Tunxi, China and now she lives and works in China and New York.


Cai Jin has been painting bananas since the beginning of the 1990s. She paints only banana leaves and stalks, in large size. The entire painting is awash with red, both bananas and background.

The first time I saw Cai JinÍs paintings was in 1994 when I was doing research in Beijing. I could not meet her at that time because she was teaching at an art school in Tianjin, but her paintings made a deep impression on me. Because her works were different from other paintings I saw in China, where figurative painting has a strong tradition. Of course, Cai Jin painted bananas, but she was not interested in bananas as her subject. In fact, when I asked Cai Jin why she paints bananas, she didnÍt give me a clear answer. She only said that when she saw withering banana trees in her home province of An Hui, she received a divine revelation to paint bananas.

The banana is merely a motif to describe her inner life, her spiritual and psychological state. It is just like sound in music: one note itself has no meaning. Music is created through connecting and organizing sounds. In Cai JinÍs paintings, meanings are created when banana leaves and stalks crawl, stand immobile, and intertwine.

In fact, music has always been a part of Cai JinÍs life. Her father was a Beijing Opera actor, and she was raised listening to that music. There was a constant flow of the lustrous music at home, and Cai JinÍs senses were opened to sound. She still listens to Beijing Opera CDs when she works in her studio in New York.

Her art is a reflection of what China went through in the 1990s. After the Tiananmen Square Incident in 1989, individualism progressively developed in China. Of course, artists were generally more sensitive to such changes than other people and created paintings depicting their personal and inner experiences. Having gone through such changes, Cai Jin became free to paint her inner world.

Cai JinÍs variations in red are rich and sometimes intense. The drawings that support her red color are filled with live vibrations where every living cell is in motion. The color red has become part of peopleÍs everyday lives in China since the revolution. However, to Cai Jin, those political and social meanings of the color are only distant memories. Red represents the blood, active life, and passion exuding from her inner world. Her paintings, abundant in red, play ñsound in red” ; a red music in which Cai Jin can freely express herself.